From the broken tube room in Maridia, head up, going through the door on the ceiling.

Now, getting the Spring Ball will be far easier once you have the Space Jump, however, I recommend before, since the Spring Ball is going to come in handy gaining some more pickups in Maridia, and it’s easier to steadily sweep across the map instead of coming back and forth a bunch of times. That being said, skip ahead to the Botwoon section if you want to make your way to the Space Jump faster.

Head right, and keep pressing right for several rooms until you eventually make your way to a room filled with dripping water and draining sand.

Not gonna lie to you guys – these sand rooms suck. Our jumping will be severely hampered, there’s only tiny platforms for us to jump on, and there are numerous enemies that are shooting spores at you which for some reason they can still shoot even after they’re fully submerged under the sand. Make your way across, slowly and carefully. We want to avoid falling in the sand. Freeze the little Draygon’s if you need to and jump on them. Don’t get too greedy with your jumping either – jump from one platform to the next, to the next. If you try to cross this room quickly, you will fall in the sand and it will probably take you so long to get out, you’ll wish you had taken your time.

Keep going right. You’ll make a pit stop in a pipe room. There’s an entrance above it, but we don’t want that right now. Keep going right until you get to a second sand room.

Same rules apply here. Take your time, freeze your enemies and use them as platforms, and don’t get too greedy with your jumps. Make your way to the right.

You’ll find yourself in a tiny room with a crumbling grapple block at the top. Hook on to it and do nothing but just hang. Eventually, the block will give away. You’ll fall in the sand, and this will be a pain in the butt, but keep jumping up until you’ve eventually jumped through the tiny opening and onto the ledge above. Wall jump straight up, minding the fireflies, and get to the top. Once you’re there, drop down on the other side, keeping to the right as much as possible. You’ll drop down right in front of a blue blast door. Open it and enter.

There will be a large enemy unlike anything we’ve seen before called a Shaktool. This guy has large, spikey gears on his legs that look like they can do some damage. DON’T SHOOT HIM THOUGH, since he’s not particularly hostile towards us. Instead, lay a power bomb and watch as the right wall gives away. Shaktool will make his way towards the wall and actually start bulldozing the sandy wall, allowing you to cross to the other side. No one would exactly accuse Shaktool of being speedy about it, but hey – beggars can’t be choosers, right?

Once you’re finally through the door on the other side of Shaktool, drop down into the Morph Ball slot and roll towards the left. Keep rolling over and you’ll see a Chozo Statue offering up the SPRING BALL. 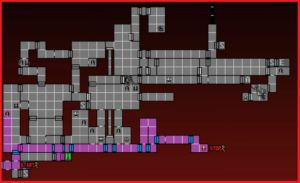