Here you’ll find the location for every Power Bomb Expansion in Super Metroid, as well as detailed explanations on how to get them and what powerups you’ll need.

In the long hallway in Red Brinstar, freeze the Rippers and use them as platforms to get you to the top of this room. Keep making your way upwards, freezing even more Rippers and using them as step stools, until you reach the tippy top of this room. Enter the blast door on your right and walk into the next room. Drop down to the bottom and bomb the middle of the floor. You’ll drop down and see a green blast door. Introduce it to a Super Missile and enter. Freeze those pesky jumping yellow enemies and make your way across the room to the left. Once you’re all the way over, you can claim POWER BOMB EXPANSION #1! 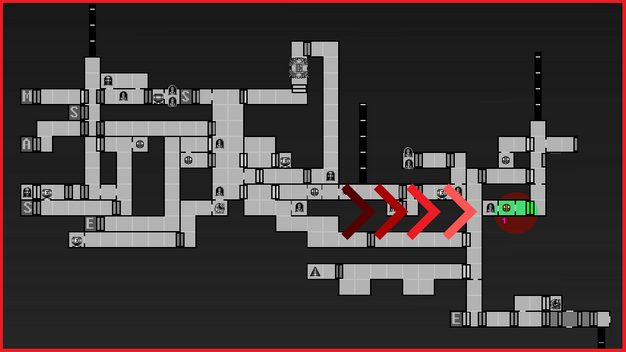 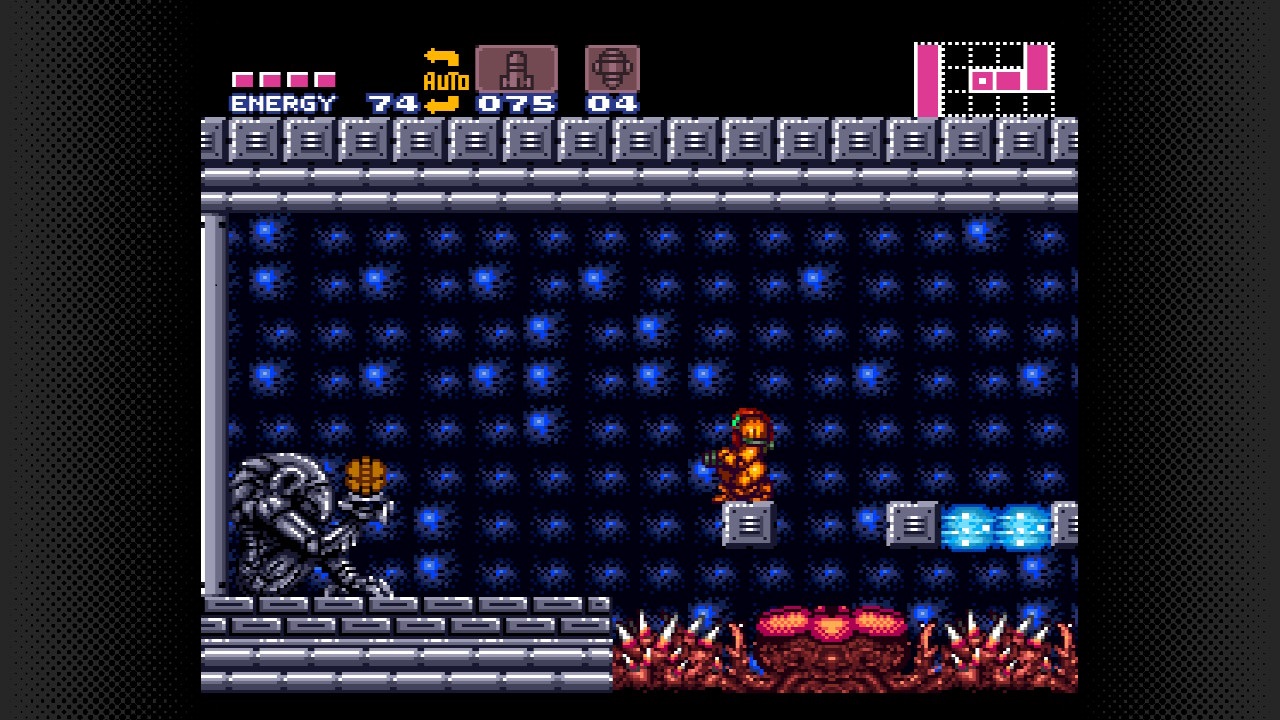 You’ll immediately be pounced on by some very aggressive enemies, but take them out and then head towards the left side of the room. You’ll notice those gross mouth/flower looking things on the ground beneath you. Lay a power bomb and watch the ground beneath you evaporate. The gross mouth-flower-thing on the far left is the only one without an enemy living in it. Drop down into the mouth and you’ll come face to face with POWER BOMB EXPANSION #2. 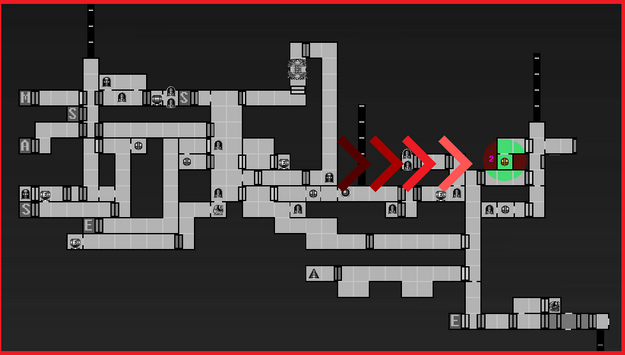 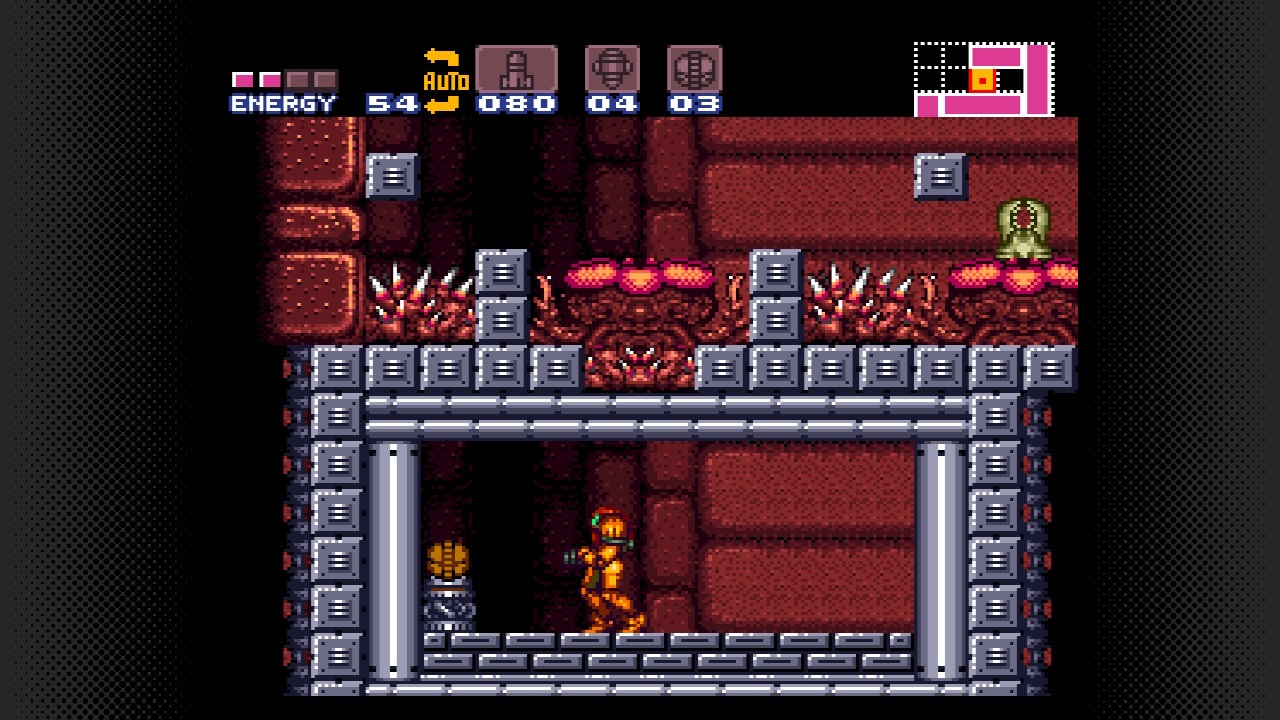 Go to the area you grabbed the Morph Ball at the beginning of the game. Lay a power bomb and watch the walls evaporate. Continue left and grab POWER BOMB EXPANSION #3. 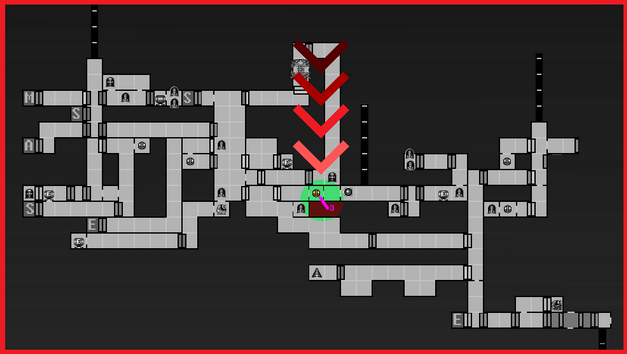 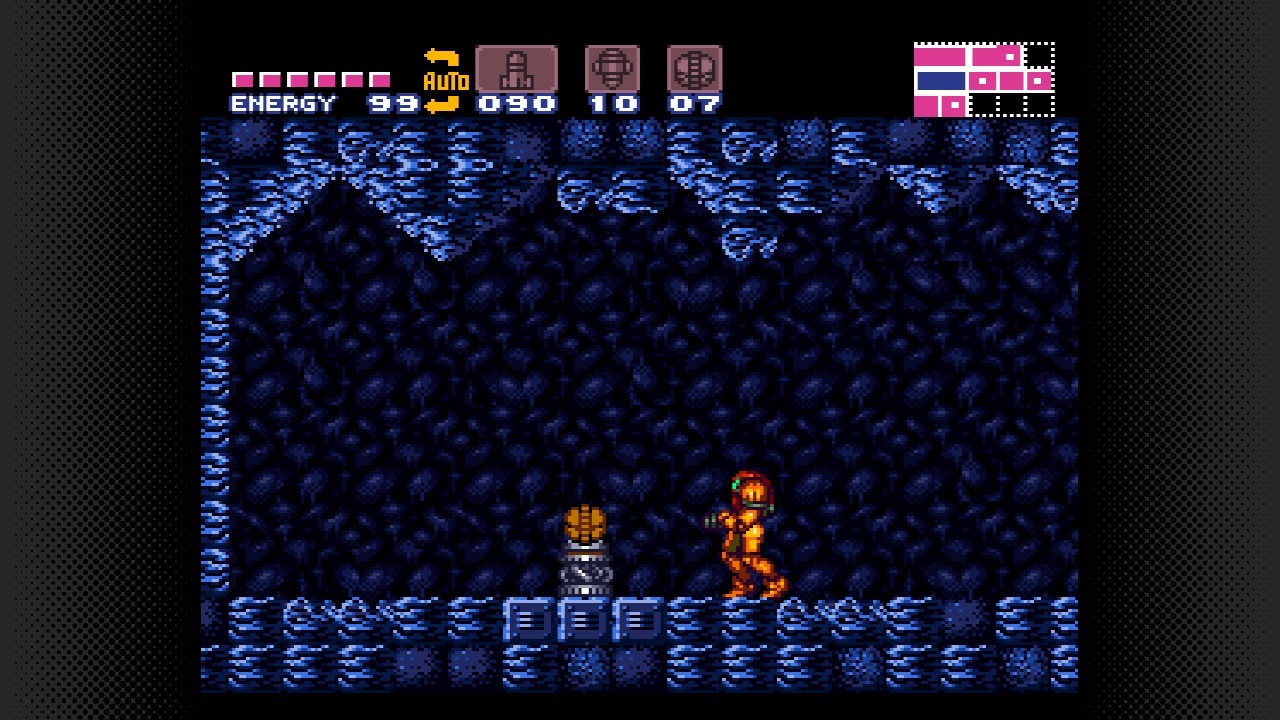 Exit back into the big pink room in Brinstar. You remember earlier when we wall jumped up to get the Missile on the upper left ledge? Wall jump back up there for round two! Once you’re at the top, drop down to the little space between walls. This looks like a dead end, but drop a power bomb and the left wall will evaporate. Now this part can be tricky – the left side wall is invisible, meaning you don’t need a bomb or anything to break it, you can just jump through and enter on the other side. This also means that it’s very tricky to see. See the map for the exact spot you want to jump in.

Once you’ve jumped in the invisible wall, work your way left, destroying all the creatures in the room. If you bomb the middle portion of the far left screen, you’ll see a spot for a Super Missile block. Blast it away, drop down, and grab POWER BOMB EXPANSION #4. 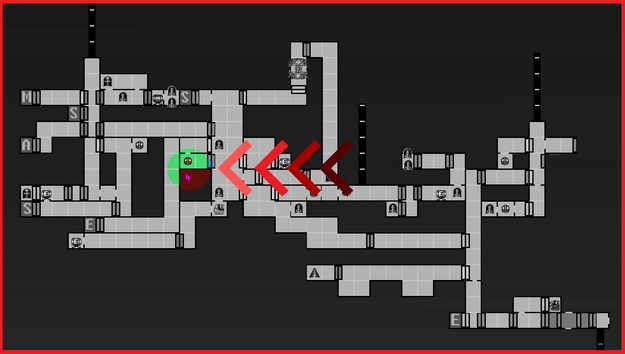 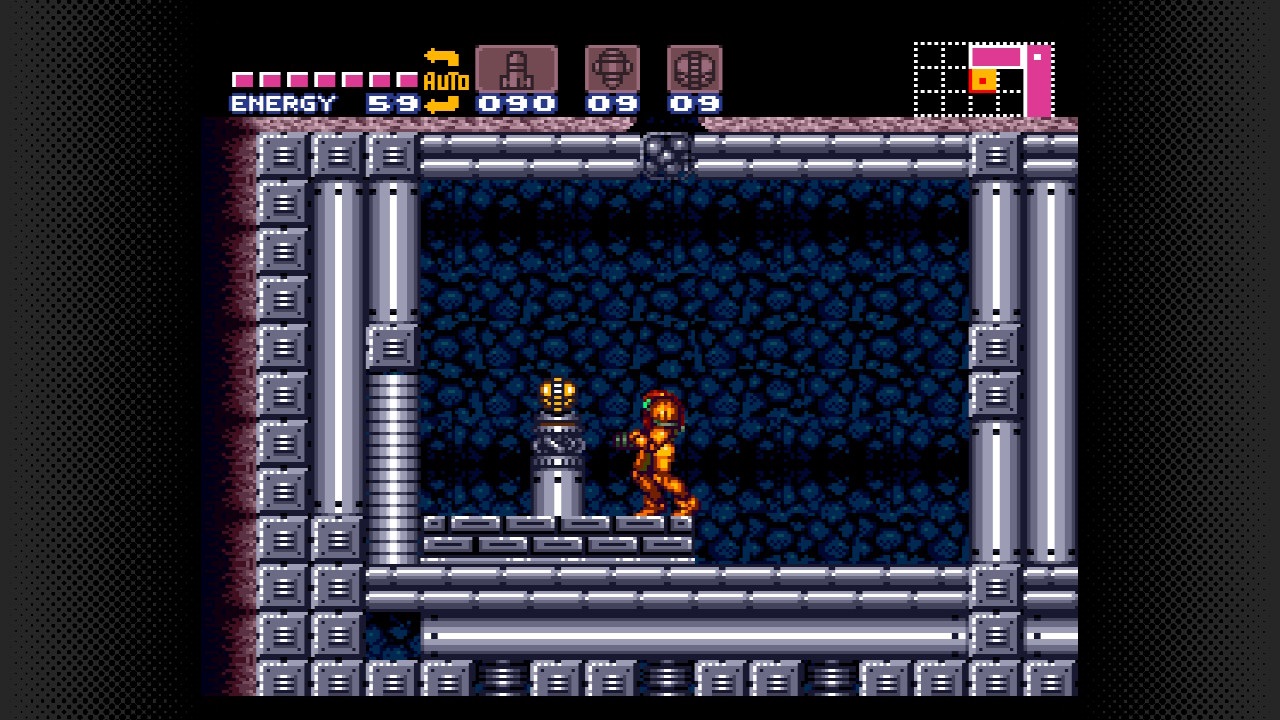 In the room you meet the Etecoons in, wall jump up to the very top. Once there, you’ll be able to see a slot for you to fit through in the wall on the right side. Jump and quickly press down to turn into a ball while falling and slip in through this slot. Roll over and get POWER BOMB EXPANSION #5! 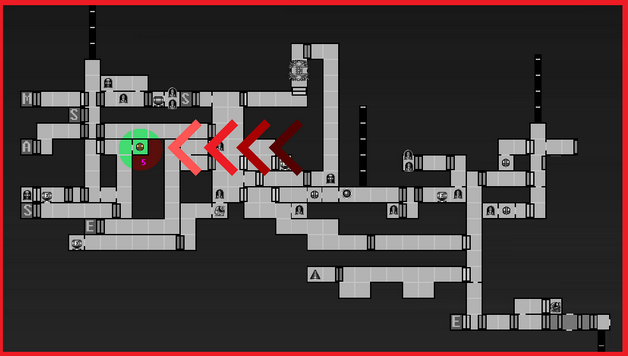 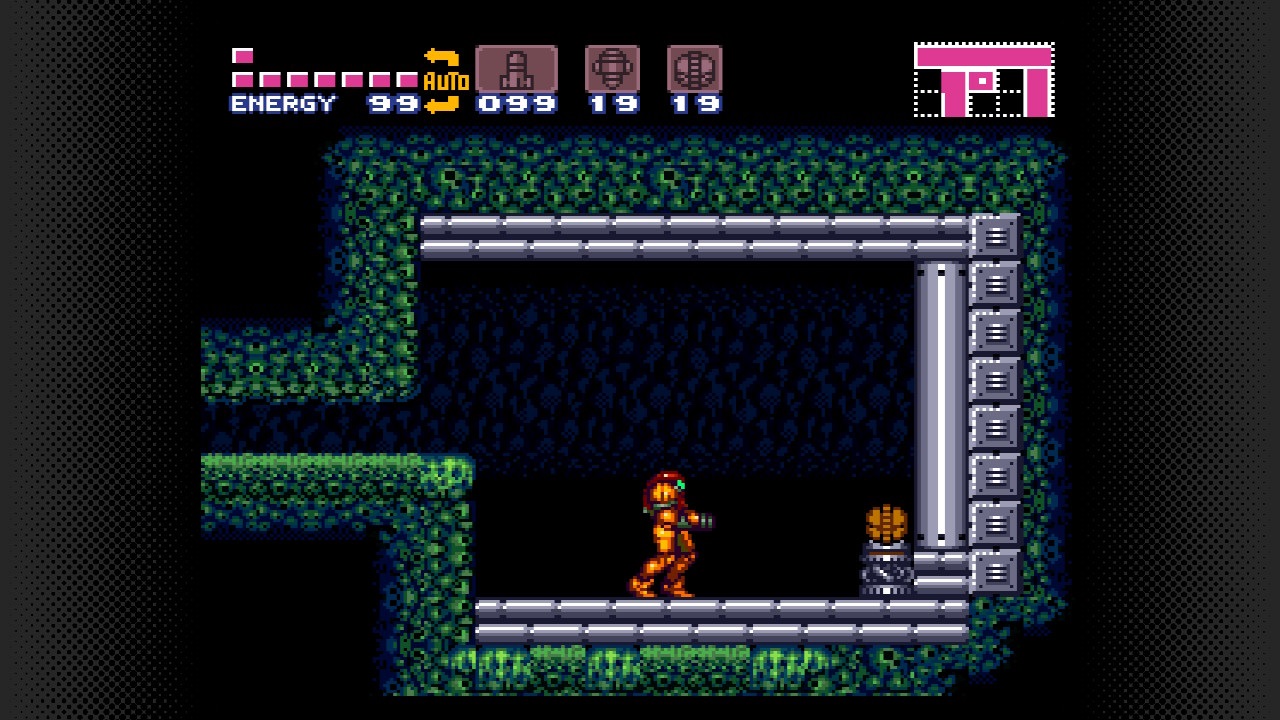 You’ll be inside a square room now where you can use a Save Station and recharge some health by shooting the little bugs. There’s a room in the top left corner that the game would lead us to believe you need to the Grapple Beam to reach, but actually, if you hold dash while standing on top of the platform enemy and then jump precisely upwards – not too high as to hit the roof and ruin your momentum, but high enough to clear the space – you can land on the ledge, enter the pink blast door room and grab POWER BOMB EXPANSION #6! If you’re having trouble nailing the jump, don’t worry – we’ll be back in this room with the Grapple Beam in a second and you can grab it then! 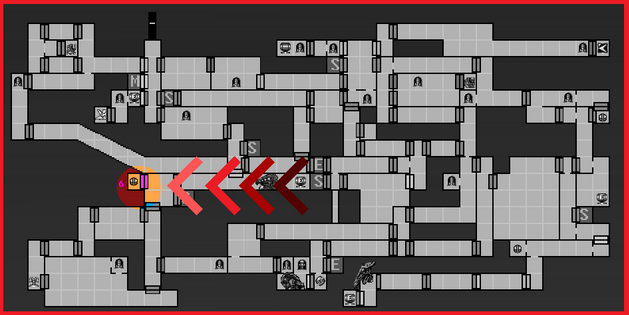 Head to the bottom right hand corner of the Freezer Room, just after where we Shinesparked up. If you shoot the ground, you can see a couple blocks can be destroyed. Drop down into this little alcove and head left. There will be two big pits of sand under here, and we want to drop down into both. It’s important to note that these are one way trips! Once you drop down, you need to take the loooong way back to the Freezer Room! Again – you can only go down, you cannot go up, so plan accordingly. Let’s start off by dropping down the first pit on the right side.

Let Samus fall in the quicksand and blast away any of the spores that try and cop a feel. You’ll eventually land in a sand pit. From the “sand waterfall” that you fell down, jump up to your left, go up and grab MISSILE EXPANSION #38. To the right of the “sandfall”, jump up and go up, minding the boulders falling on you. Once you’re at the top, get into Morph Ball form and fall down, pressing to the right. You should squeeze into a tunnel, which will lead you right to POWER BOMB EXPANSION #7. 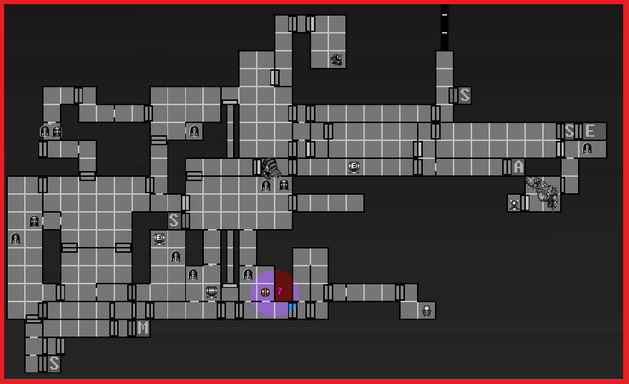 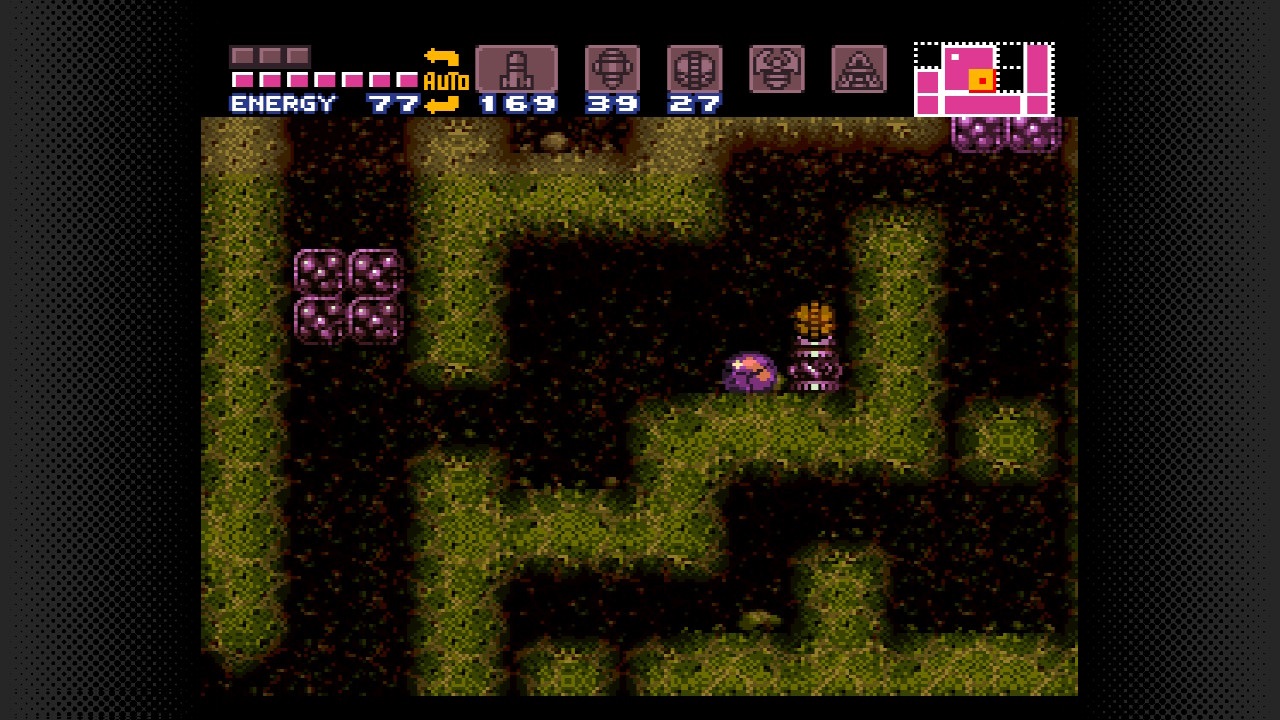 You’ll be in a tiny room with a really cool looking Chozo Warrior statue in the middle. Get to the left side of the statue and shoot diagonally down. You’ll see a little gate pop up. Hop on it and get into Morph Ball form and roll over to the left. Take out all the bugs on the other side of the room and keep going to the very left most wall. Under the pillar, lay a bomb and roll over to grab POWER BOMB EXPANSION #8! 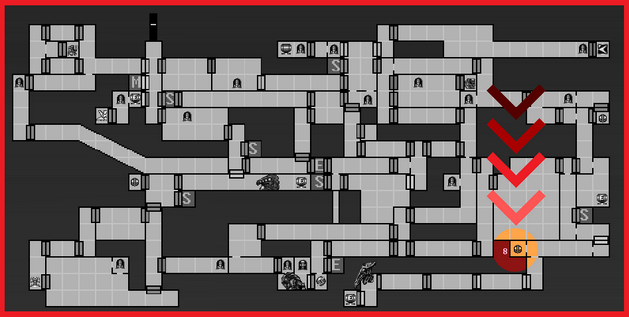 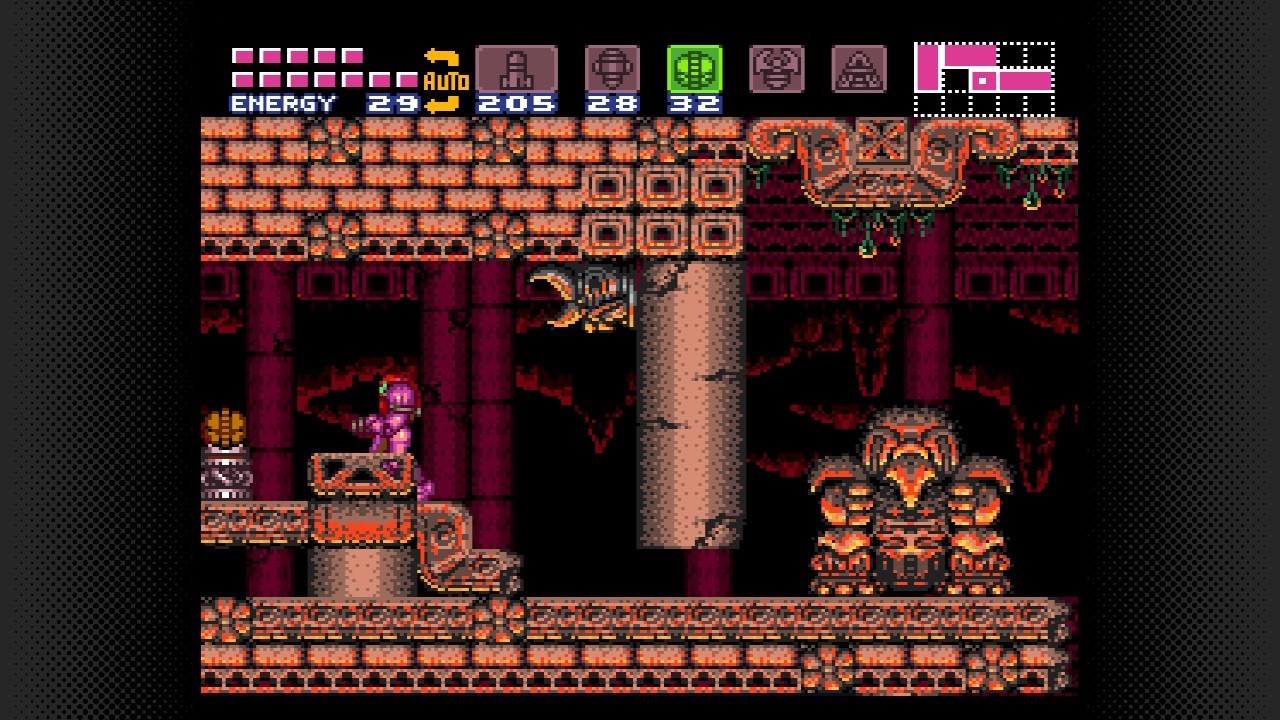 From the room you acquired Missile Expansion #43 in, lay a power bomb and you’ll see a couple pathways behind the Missile tank revealed. Use your Spring Ball to jump up to the highest pathway and roll over. This next section is kind of weird since most of the pathways are invisible to us, but basically you want to keep jumping in Morph Ball form as high as you can, roll over to the right, drop down, and jump right again. Keep doing this until you land on a dissolvable brick. Lay a bomb and keep rolling to your right until you see a door on the floor. Fall through the door and you’ll see a power bomb on your righthand side. Shoot the blocks, jump over and POWER BOMB EXPANSION #9 will be yours! 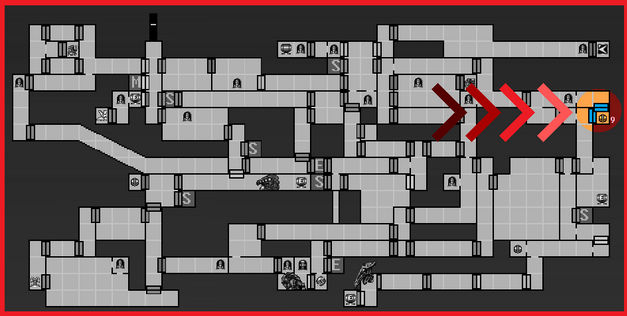 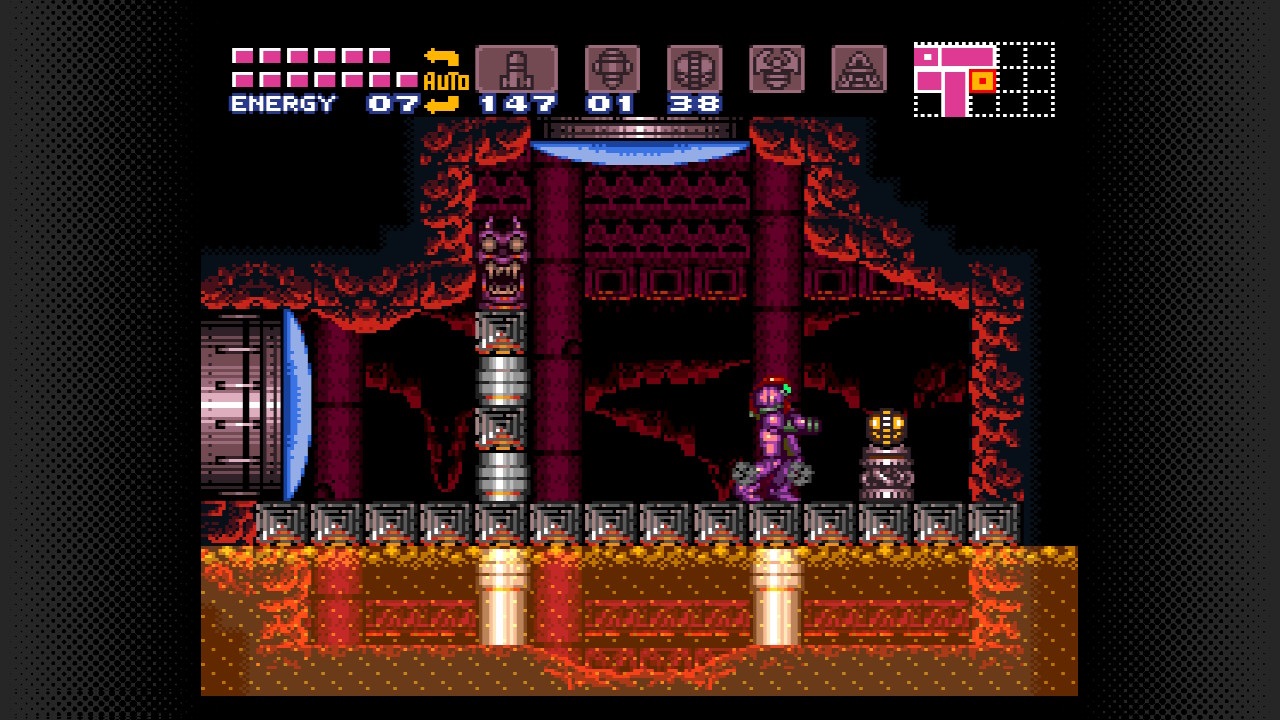 From your ship, Space Jump up to the very top right corner of the Landing Site. There will be a yellow door up on a high ledge. Open it up and head on in. This hallway has tons of things going on: lava, spikes, enemies and more. Cross the room and get POWER BOMB EXPANSION #10. 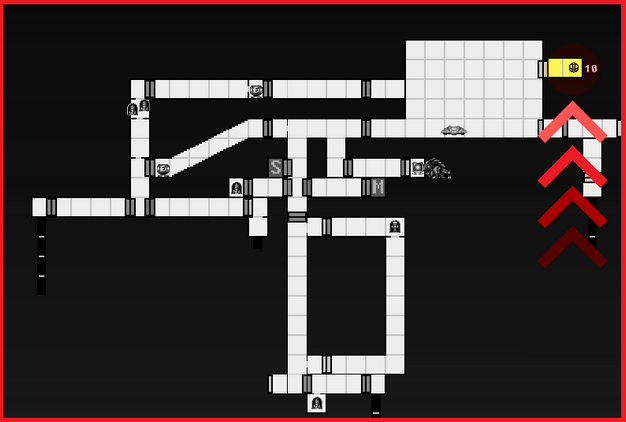 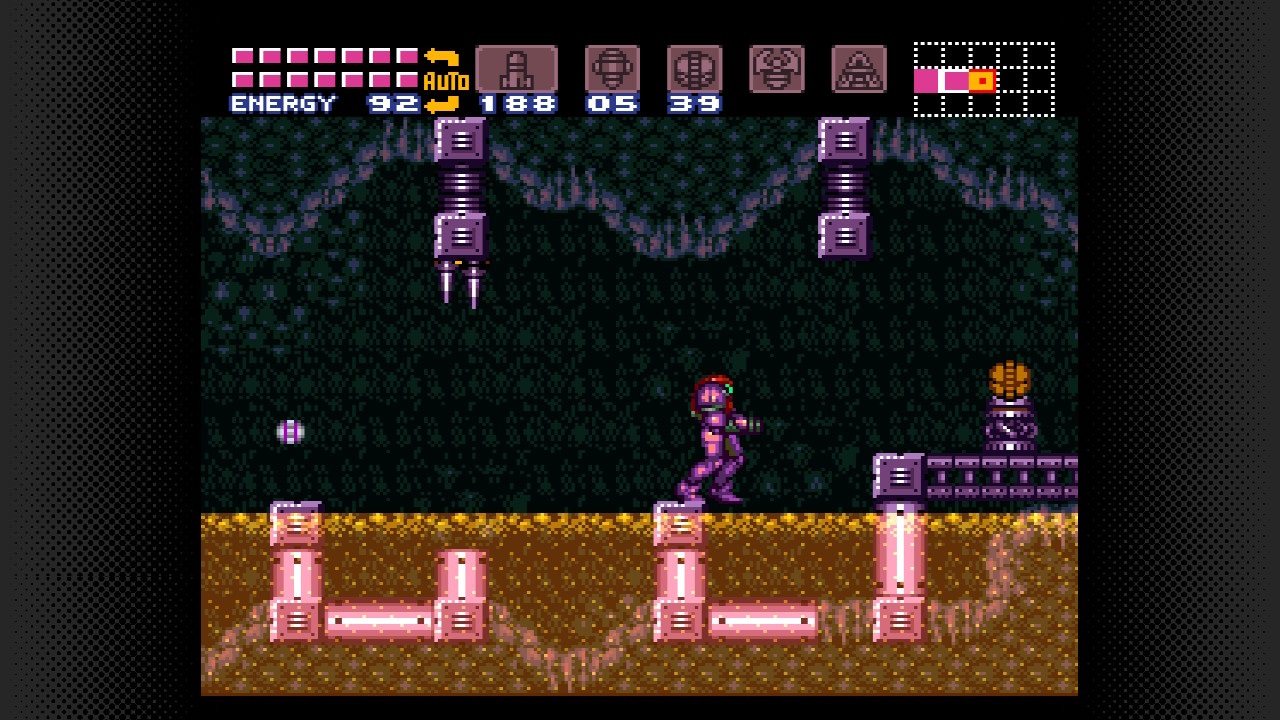